On the occasion of the Czech presidency of the Council of Europe, the daughter of the kidnapped journalist Jamshid Sharmahd turns to the Czech Prime Minister Fiala. Frauen für Freiheit (Women for Freedom) supports the work to free the European hostages held captive by Iran's Islamic regime and documents Gazelle Sharmahd's letter. #FreeSharmahd

Before I get to the reason for writing to you, first and foremost, and on behalf of our family, I want to thank you, and your people, for the steadfast support of the defense of the fundamental rights of Europeans. In your statement at the beginning of the Czech Presidency of the Council of the EU, you stressed the need for security and the threat posed by Russia.

Thus, I know that you follow the great footsteps of the admired Czech statesman Vaclav Havel: “Human rights are universal and indivisible. Human freedom is also indivisible: if it is denied to anyone in the world, it is therefore denied, indirectly, to all people. This is why we cannot remain silent in the face of evil or violence; silence merely encourages them.”

This encourages me to count on you and your government to uphold human rights during your presidency at the European Council, especially in times when Iranians, once again, risk their lives to fight for freedom. My father, Mr. Jamshid Sharmahd is a citizen of the European Union. A loving husband, father, grandfather, engineer, journalist, and lover of freedom for his ancestral homeland of Iran, he was kidnapped in the United Arab Emirates and taken hostage by the Islamic regime.

My father has been an outspoken critic of the Islamic regime for over 14 years. As a human rights activist and journalist, he created an internet platform for the oppressed people in Iran to freely share their thoughts and stories and reported about them in his radio station. Giving people inside of Iran a voice is a severe threat to the dictatorship and the regime persecutes activists with the harshest means possible.

Jimmy, as his close friends and family members call him, survived an assassination attempt by agents of the Islamic regime on US soil in 2009. In 2020 he was kidnapped on a flight overlay in Dubai and was taken to Iran where he has been kept hostage at an unknown location ever since. He is being held in the most inhumane condition that you can imagine. For more than 800 days, he has been suffering in complete isolation in solitary confinement, a form of psychological and physical torture.

He does not see daylight and has no access to fresh air or healthy nutrition. He has lost over 40lb of weight and almost all his teeth have fallen out. He has advanced stages of Parkinson’s disease and no proper access to medication, thus suffering severe body aches and shortness of breath. He is denied visits, even of the German consulate, and access to a lawyer. He was dragged to seven show trials and forced to confess to crimes he did not commit.

In violation of his human dignity, and various international human rights laws and standards, he was paraded blindfolded, handcuffed and with a swollen face on national TV, to demonstrate the power of the tyrannical regime. The regime is threatening him with the death penalty, which according to regime agents is a certainty and has been predetermined before the sham trials even began. He has practically no contact with his family. In the last 12 month, he was only allowed two phone calls to his wife, both under regime surveillance. On the last phone call, his voice was weak, he had lost all sense of time and space, and he was struggling to find words. All of these are classic symptoms of PTSD and other severe debilitating effects of prolonged isolation and torture.

Prime Minister Fiala, we are scared and worried for my father’s life. While the Iranians are constantly prolonging the absurd theater that they call „a trial“, my father is slowly wasting away under the harsh conditions of this unjust detention.

The kidnappers of my father broke international law, human rights, and Iranian law repeatedly — to silence a journalist. The regime uses my father as part of a coordinated and global campaign to scare activists and freedom fighters. The regime representatives have become brazen and have even targeted former American policymakers and human rights activists here in the United States!

The main advantage of kidnapping and persecuting dual nationals for terror regimes is to use human beings as bargaining chips to pressure Western governments. I am therefore asking you to pay attention to my father's case, since the fate of one European citizen could be the fate of many more if we do not put an end to hostage diplomacy and inhumane tactics. Please stop all trade with Iran until my father and other European citizens are released. Stop all negotiations unless they primarily concern the release of hostages like my father, and many other EU citizens. Replace all negotiations – be it over the prolongment of a nuclear deal or trade – with human rights talks.

Please demand of the High Representative of the Union for Foreign Affairs and Security Policy, Josep Borrell, to undertake everything in his power to free my father. Please urge the Working Group on Arbitrary Detention to make a final decision on my father’s case, too. The Iranian government pays attention to international pressure, and it could help save Jimmy’s life and open the way to a path to freedom - not only for my father but also for those demanding human rights in the streets of Iran.

Russia kidnapped Ukrainian Citizens to use them as bargaining chips. Putin learned from the Iranian regime. Russia's ally Iran is an equally dangerous threat. To protect the EU and its citizens, it is necessary to understand this threat. It is a direct threat to the lives of European citizens. What has been done to my father will have impacts far beyond his case and the regime needs to know that the EU will not tolerate an attack on one of its own. As President Havel once said, “We cannot remain silent in the face of evil or violence; silence merely encourages them,” in this case, the Islamic regime of Iran.

I know that the Czech people value freedom. They have been one of the biggest forces in Europe to shake off a repressive regime. I count on you to uphold this freedom for the EU and all its citizens. I know that you will as well be part of the JCPOA talks as chairman of the Council of the EU. I am asking you kindly to be the voice for the good citizens of Europe, who need your help against state tyranny. 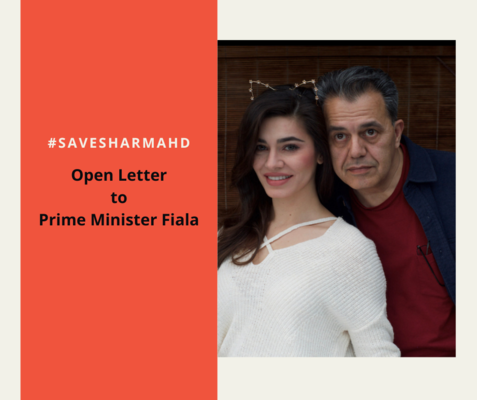